On Saturday, December 19th the doctors started my chemotherapy. It was a 7+3 regimen, meaning that I would receive one type for 7 straight days along another type for the first three days. I was told about the main side effects – fatigue, pain, mouth/throat sores, nausea and vomiting, changes in thinking/memory, and hair loss.

I was expecting to become tired but seemed to have more energy than before I checked in. I still had my appetite, so I was ordering a variety of food off the hospital menu to try to find out what was good. The omelets and beef vegetable soup were great, and the pot roast, chicken fajitas, pepper steak were good to tolerable. The rest of the food is the pits.

As the week passed, I started noticing some of the effects of the chemotherapy. One of the side effects is inflammation of the gastrointestinal tract. I first started to feel stomach pressure, like I had a full stomach. I was also noticing differences in how food would taste. Things just didn’t taste right. My mom brought by some home-cooked chicken and noodles. At that point, they were good, just tasted a little off, like some of the seasoning was missing, and something else was added.

By the time Christmas came, I was looking forward to eating “real” food. The family was all busy preparing food in the morning. My parents stopped by in the afternoon with a plate of roast beef, macaroni and cheese and green beans. Later in the evening my wife brought the turkey and dressing and some seafood gumbo. Again, it tasted good, but a little off.

The day after Christmas is when my chemotherapy was scheduled to end. I had made it through without experiencing many of the side effects. I still had all my hair (receding hairline aside)! But the GI tract issues were getting worse. I started getting a gag reflex whenever eating or taking pills. I also started spiking fevers – it would just to 101-103, then go back down over the course of the day, then spike back up.

It became more difficult to take pills. I found that the only way to get a pill down was to break it in half, then drown it down with water. It took sometimes 2 full cups of water to get the 7 or so pills down that I needed to take at that time. But all the extra water that I was taking in caused my sodium levels to go down, so they put me on a water restriction – 1 liter of liquid for the whole day. Something had to give.

I checked in to Henry Ford Hospital on December 17th. Most of that day was just spent getting acclimated to the new environment. I had a private room with a bathroom and sitting area. I brought a few things to keep me busy – my MacBook (which has music and videos), iPad (games and books), iPhone, and my Alpha History Book. I quickly fell into a routine of blood draws, vital checks, and doctor consults. My kids and family were able to visit and bring food. My creative daughter Ava made Christmas ornaments that I was able to hang on my IV pole and around the room. I was able to have visitors, and many friends and family have passed through since I checked in.

The RNs and nurse assistants have been terrific. To be able to work in an environment like this, with patients in so many different states of health and pain, yet keep and exude a positive, sunny attitude take a special person. That’s the main reason why I decide not to pursue a medical degree. I found during my time working and volunteering an Michigan Children’s Hospital that I internalized too much and my face showed too much.

The first few days went by quickly. On the second day, the nurses inserted my PICC (peripherally inserted central catheter) line in my right arm. It seemed like this would be a painful process, but it was comfortable. The PICC allows them to draw blood and deliver IV fluids and medications without having to poke me each time. They immediately began

It’s hard to describe how a typical day starts and ends because this is a 24-hour operation. My sleep schedule was immediately thrown off because of the frequent vital checks throughout the night. I’d find myself up in the of the night watching TV or walking the hall. Additionally, they began to administer more fluids, which caused my bathroom frequency to increase to once an hour (yeah, once an hour, 24 hours a day). The bathroom thing impacted my sleep in a huge way, so I’d take short naps throughout the day between visitors and tests.

On that day, I was diagnosed with Acute Myeloid Leukemia. I was shocked, surprised, scared, but most of all, relieved, because it helped to explain why I’d been feeling the way I had for the past few months, maybe even years. 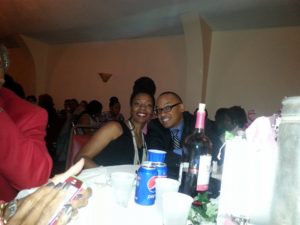 I had been feeling really bad for the past few months. It started this summer. I had been sneezing a lot, mostly at work, and thought something was in the air; everyone in the office seemed to be coughing or sneezing. In September I started having a problem with my neck. It just stiffened up one day at work. I couldn’t turn my head, and had pain and tightness throughout my shoulders and back. I went to urgent care for that, and they took x-rays and prescribed a muscle relaxant. I was asked to follow up with my Primary Care Physician in two weeks. Unfortunately, he didn’t have any appointments for about 5 weeks (more on that later). We spoke by phone, and he said not to worry, that it was most likely just arthritis in my neck.

A few weeks later, the sneezing changed to a head cold. On October 17th, I had spent the entire Saturday outside – it was the day of the Michigan State vs. Michigan football game. I arrived in Ann Arbor early that day. I attended the ESPN College Game Day taping in the Diag, walked to the UM Golf Course for a tailgate party, then watched that awful game. I blamed the head cold on spending so much time outside that day – it was cold, and I was underdressed for part of the day.

To fight the head cold, I was taking OTC cough medicine. Soon, the head cold moved to my chest and I started having trouble breathing, soon after that it moved to my head again. I went back to urgent care. This time I was diagnosed with a sinus infection and prescribed an antibiotic. I was still sneezing, and I still had periodic back pain, which was managed with the muscle relaxant.

On November 13th, I finally had the appointment with my PCP. The sinus infection was gone, but I was still sneezing, still had periodic neck pain, and was having difficulty breathing. He started treating me for allergies with a nasal spray (Flonase), but didn’t look closer at the breathing problems. By this point, I was also starting to feel very run down.

A few weeks later, the sneezing was better, but I was still having trouble breathing, and I was tired all the time. I would sleep all weekend, and come home from work many days and go right to sleep. I attributed the tiredness to football being in full swing – pro football kept me up Sunday, Monday and Thursday nights, and college football kept me up (and out) on Saturdays. I tried going to bed earlier on non-football days. I found that I was still tired all the time, even after getting 10-12 hours sleep. Getting myself up in the morning for work was a chore.

On December 15th, a morning meeting was canceled and I decided to try to get a same day appointment with my PCP. He wasn’t available, and neither were any of the other doctors in his practice, so I went in to see a different doctor in Sterling Heights. That doctor checked my heart, took chest x-rays, gave me a nebulizer as a breathing treatment, but most importantly, had blood work done. About 7 pm that night, I got a call from him with my test results. The CBC (complete blood count) revealed low hemoglobin (which explained the tiredness), low platelets, and high white blood cell counts. He said that I should see a Hematologist immediately.

On December 16th, his office help to schedule an emergency appointment with the Hematologist. They did additional tests and took a bone marrow biopsy. This confirmed I had Acute Myeloid Leukemia. They asked me to check in that day… for a MONTH. What a shock. My son Brandon had a winter band concert scheduled for that evening, plus I needed time to talk with my wife, parents and siblings. 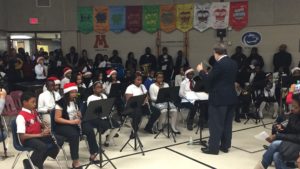 We attended the concert (which was fabulous by the way), and I told my parents and kids after. I checked in to Henry Ford Hospital the morning of December 17th.

The most difficult part for me throughout this process is thinking about my wife and kids, and whether I will be there for them as they grow up. I still don’t know exactly what an AML diagnosis means for me and the quality of my life going forward. I know I’ll need to go through a regimen of chemotherapy starting on Saturday. I’ll get 7 days of chemotherapy, then the remainder of my time will be spent waiting for my blood counts to go down to 0, then back up to normal. The goal is for me to stay in remission after that. I should be in decent shape during the process.

They said I’ll probably be out of work for at least 6 months – mostly just staying away from people, going to appointments, and getting lots of rest. It all depends on how things progress during and after my month in the hospital. I should be able to see my kids grow up. I just have to do my part to fight this thing.

I still have a million questions, and I know that I’m not the first person to go through this. I’ll document what I can to help those who start their fight after mine. My biggest pieces of advice so far:

What is Acute Myeloid Leukemia?

Adult acute myeloid leukemia (AML) is a type of cancer in which the bone marrow makes abnormal myeloblasts (a type of white blood cell), red blood cells, or platelets.

A myeloid stem cell becomes one of three types of mature blood cells: