On Saturday, December 19th the doctors started my chemotherapy. It was a 7+3 regimen, meaning that I would receive one type for 7 straight days along another type for the first three days. I was told about the main side effects – fatigue, pain, mouth/throat sores, nausea and vomiting, changes in thinking/memory, and hair loss.

I was expecting to become tired but seemed to have more energy than before I checked in. I still had my appetite, so I was ordering a variety of food off the hospital menu to try to find out what was good. The omelets and beef vegetable soup were great, and the pot roast, chicken fajitas, pepper steak were good to tolerable. The rest of the food is the pits.

As the week passed, I started noticing some of the effects of the chemotherapy. One of the side effects is inflammation of the gastrointestinal tract. I first started to feel stomach pressure, like I had a full stomach. I was also noticing differences in how food would taste. Things just didn’t taste right. My mom brought by some home-cooked chicken and noodles. At that point, they were good, just tasted a little off, like some of the seasoning was missing, and something else was added.

By the time Christmas came, I was looking forward to eating “real” food. The family was all busy preparing food in the morning. My parents stopped by in the afternoon with a plate of roast beef, macaroni and cheese and green beans. Later in the evening my wife brought the turkey and dressing and some seafood gumbo. Again, it tasted good, but a little off.

The day after Christmas is when my chemotherapy was scheduled to end. I had made it through without experiencing many of the side effects. I still had all my hair (receding hairline aside)! But the GI tract issues were getting worse. I started getting a gag reflex whenever eating or taking pills. I also started spiking fevers – it would just to 101-103, then go back down over the course of the day, then spike back up.

It became more difficult to take pills. I found that the only way to get a pill down was to break it in half, then drown it down with water. It took sometimes 2 full cups of water to get the 7 or so pills down that I needed to take at that time. But all the extra water that I was taking in caused my sodium levels to go down, so they put me on a water restriction – 1 liter of liquid for the whole day. Something had to give. 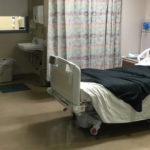 If you could save a life, would you do it?